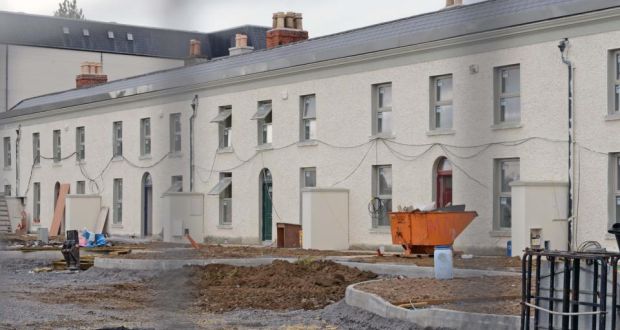 House prices to continue climbing but at slower rate – survey

Last year saw the sharpest rates of house price growth in seven years and 2015 will see further price increases, although at more modest levels, according to the latest house price survey from MyHome.ie.

The report, produced in conjunction with DKM Economic Consultants, found although asking price nationally average rose by 2.6 per cent to €194,000 during the 2014.
While strong transaction activity was reported last year, uncertainty over a number of new developments is expected to dampen the rate of price increase in 2015, the report found.

“The Central Bank’s new guidelines on mortgage lending which are expected to introduce a Loan to Value limit of 80 per cent for new lending along with separate proposals to restrict any residential mortgage to 3.5 times gross annual income have the potential to limit the rate of price increases seen in recent times,” Caroline Kelleher from DKM said.

“However there is some uncertainty over whether or not these will be implemented as originally outlined. In addition the relief on capital gains tax introduced in 2011 to incentivise the purchase of property has terminated and this is likely to stem the rate of investment in Buy to Let properties in 2015” she added.

Ms Kelleher pointed out that a weak supply of new houses, particularly in the Dublin region would remain one of the main challenges facing the property market. “Indeed changes to building regulations are adding to the cost of construction and could potentially limit new supply. This would suggest that any impediments to developing new residential units should be reviewed to ensure a more sustainable level of new house building” she concluded.

The latest figures from myhome.ie – which is owned by The Irish Times – shows a slight moderation in the rate of increase. In the last three months of 2014 the average asking price nationally grew by 0.6 per cent – down from 1.4 per cent in the previous three months.

The corresponding increase in Dublin was 2.2 per cent – down from the 3 per cent recorded between July and September.

The latest increase took the average asking price in the capital to €269,000 while the annual percentage increase in Dublin was put at 11.4 per cent.

“The Property Price Register indicates that in the year to September over 27,000 transactions had taken place. Based on current trends total transactions in 2014 look set to hit the 40,000 mark, an increase of 38 per cent on the 29,000 recorded in 2013,” said MyHome.ie’s managing director Angela Keegan.

She said a “substantial rise” in transactions during 2014 was “most welcome as was the price growth recorded for three and four bed semis in most counties around the country. This is very heartening and while still short of the level required for a properly functioning property market it shows the recovery is gaining ground” she said.